One month of home schooling down, just nine more to go!

I’ve sat down to write this post 3 times and each time my attitude towards this little schooling experiment is different – carefree, borderline hippie one minute, neurotic worrier the next, and then back to some content but vigilant stance which may be my default setting.

I came into this whole home or road schooling thing without much formal planning. I asked my kids’ teachers to share with me the following year’s curriculum, and they generously gave me their teaching matrices, learning objectives, a few books, and/or references for books we could purchase ourselves. I had also read, over the years, a fair amount about different education philosophies or had experienced them directly when either Leeloo or Zoel attended a particular school – montessori, steiner, bank street, quaker, international baccalaureate, from progressive child-led approaches to more structured methodologies. And in the months before we took off, I started reading about what other traveling families were doing, from the unschooling set (basically no pre-planned curriculum) to the K-12 internet schoolers whose classes don’t differentiate much from your average U.S. public school. The range of set-ups was wide, and so instead of finding a model I could follow, I realized that the families that seemed successful were making up their own thing, creating a home school that fit their family, their lifestyle, the parents’ abilities, the kids’ needs and everybody’s various temperaments. With that in mind, we left home in Bologna with the 4th and 7th grade curriculum guides, math and english books, a geology book, spanish books (since we were spending the first part of our voyage in South America) and 4 thin notebooks. Unfortunately, we could only find 2 digital versions of these books, so the rest weighed down our luggage with a few extra pounds.

So how are we doing a month into this experiment? Who really knows!? Certainly not me. Maybe I’ll have a better sense at the half way point or maybe not. What I can tell you is that the aforementioned neurotic worrier is reassured by the fact that Zoel and Leeloo are definitely learning. We may not be following those curriculum grids as closely as I thought we might or getting in the amount of desk work I thought we might need to, but they are definitely learning, ingesting information about culture, language, nature, politics, and history just by walking around in it, seeing it, listening to it. We spent last week exploring the unique environment of the isolated Galapagos Islands in Ecuador, where swimming with sea lions is not a pay-to-play event but just a regular morning on the beach. Earlier in the month, it was the sophisticated, urban environment of Bogota, Colombia. Both countries, we learned, share a similar colonization and independence from Spain story, and now the revered Simon Bolivar is a known quantity in our household, on par with Washington and Lincoln. Before that, we spent time with family in Panama and learned of its close ties to U.S. and French history, and the ingenuity and audacity of the humans who imagined and built such a crazy thing as is the Panama Canal. And finally, we started off in one of the most biodiverse parts of our globe, the rainforest of Costa Rica, where we walked through flora and fauna unlike anything in our northern hemisphere, and ogled wild animals we’d only seen in books.

The hippy in me is satisfied with all of this, and the rest of me is trying not to stress too much about the fact that our go-with-the-flow methods will jump around from subject to subject more than the typical school might, as we react and interact with what’s going on around us. If a love of marine biology has awakened in Leeloo, then isn’t it amazing that she can dive right in and spend as much time as she likes exploring ocean life? Things at the 7th grade level are a little harder to move through organically, avoiding panic about the fact that middle schoolers around the world are loaded up with information and regularly made to face new intellectual challenges, meant to get them ready for a more rigorous program coming soon in… cue Beethoven’s ninth… High School. Luckily, deep down, I know that Zoel will be fine. Sure, there may be some areas where he’ll have to catch up, but the leaps he’s making out here, meeting mental and physical challenges, will hopefully balance things out.

The personal growth taking place right before our eyes every day is considerable- as they learn to talk with many different kinds of people, experiencing just how handy it is to speak a few languages as you move through the world; as they dare to try things for the first time – snorkeling with sea mammals, zip lining across a tropical forest canopy, riding horses through the countryside, tasting arepas, humitas, batidos, and casados; and as they strengthen their independence while deciding what they want to learn next, readying their own bags, keeping track of their stuff, seeking out conversations with new friends and choosing to do some exploring on their own. (As I wrote part of this, they took off on a dinghy with a naturalist to explore Darwin’s first stop in the Galapagos!) For 12-year old Zoel who’s making the sharp turn from boyhood to teen years, it seems all too perfectly timed to get to try on a new, more autonomous character. Unexpectedly though, it’s also a major treat to see 9-year old Leeloo doing the same, maybe because regular life doesn’t allow us the time to see the second child’s development trajectory as clearly as the first, but out here, who she is seems to be spotlighted, even as it shape shifts along the way.

All in all, this organic, somewhat amorphous learning is working for us at the moment, but I’ve read it won’t do for the Philadelphia Board of Education, so I’m tracking our hours and (loosely) the type of learning for submittal next June, in the hopes of having our year of home schooling certified. I’m documenting using the business school grad default… an excel spreadsheet. For the curious, I’ve included a few weeks for each child below!

There is one more thing that I can tell you for sure after a month of road schooling, and that’s that regular school – the thing invented during the industrial age to keep our kids busy most of the day and ready for adulthood at the factory – keeps families from doing a lot of cool stuff. I don’t know that we realize how tied down we actually are to that 10-month merry-go-round of drop- offs, pick-ups, after-schools, sports activities, early-morning wake ups, and tight bedtime schedules, year after year after year. Take all that away, and a substantial amount of time magically appears. 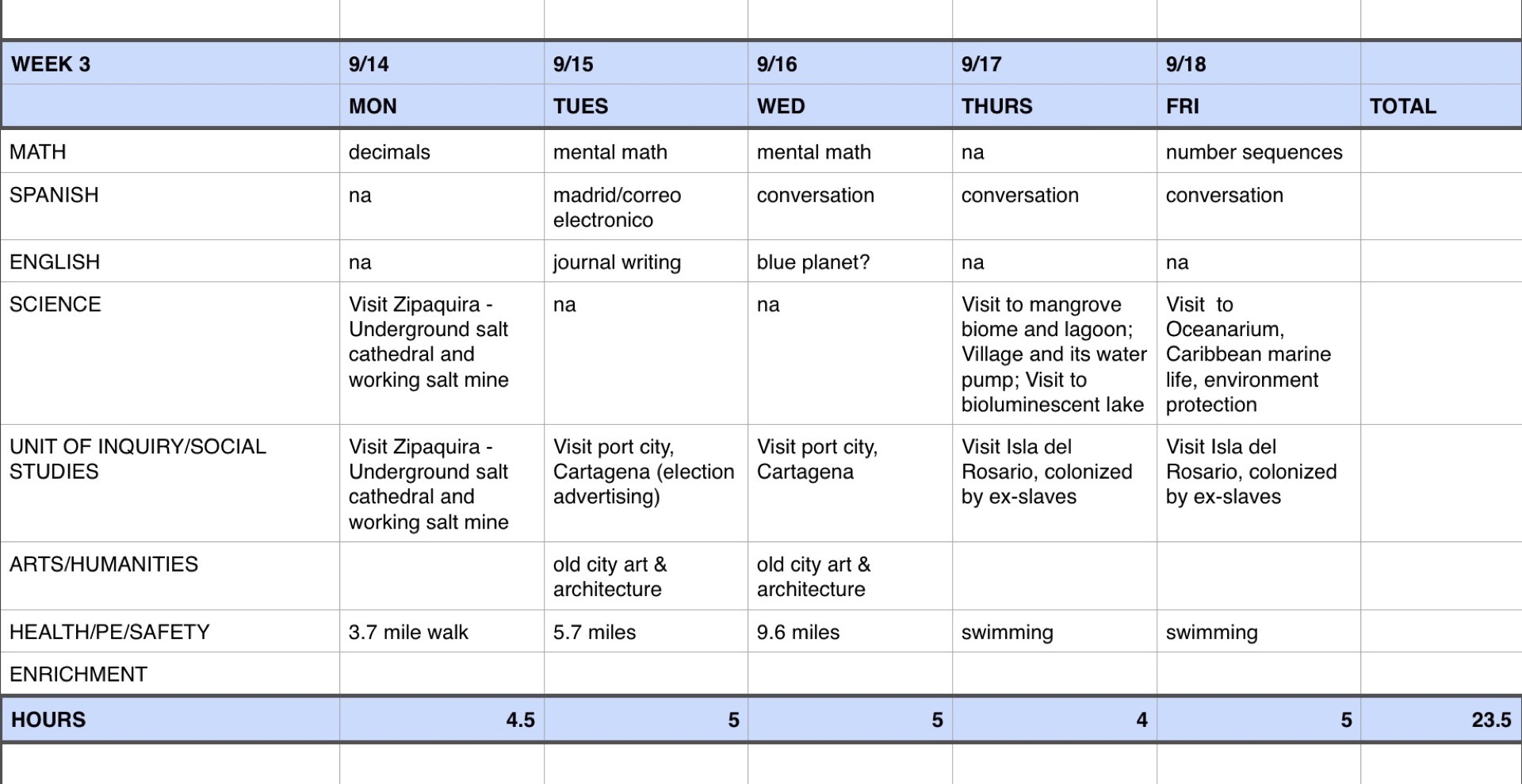 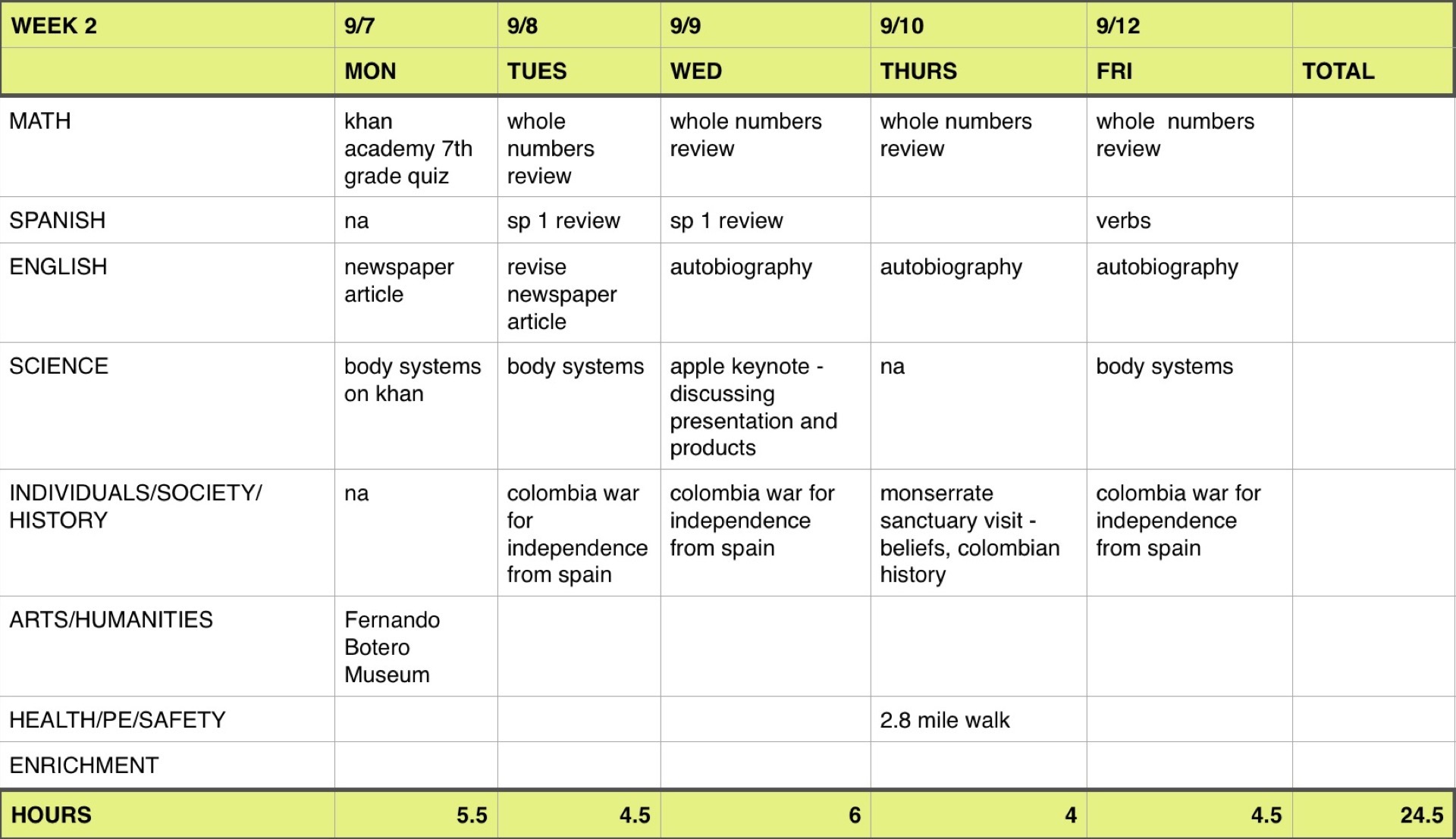 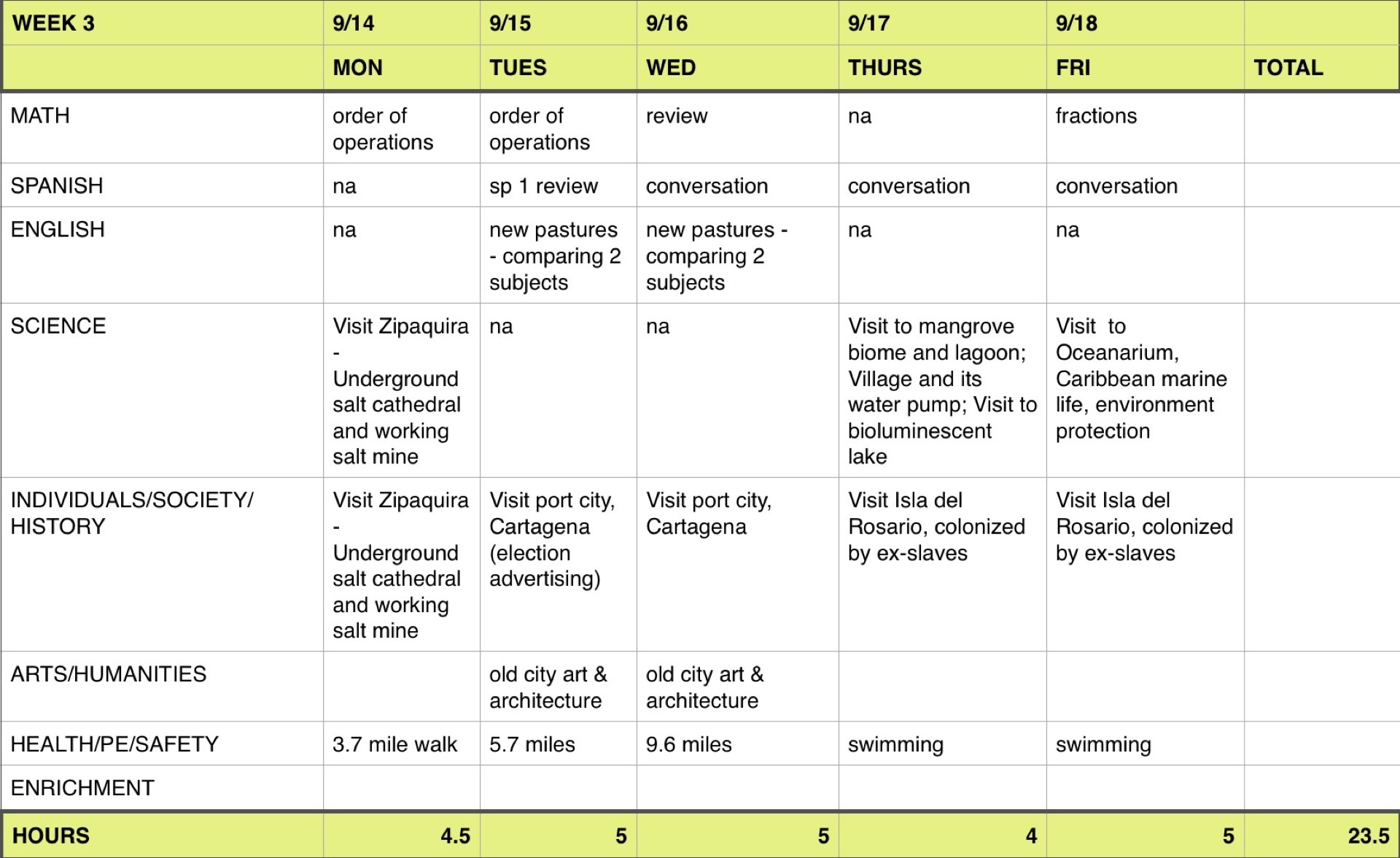 Previous Post JOURNEY TO THE MIDDLE OF THE WORLD!
Next Post MEANWHILE, AT THE RANCH...
Back to Posts