While the boys climbed the Andean mountains, Leeloo and I stayed behind in Cusco, free to do whatever our little twosome desired!

At 5:30am on the first day of the trek, Stefan, Sebastien and Zoel’s minivan pulled away from our Cusco apartment, as we waved frantically and blew kisses at them and a bunch of Swiss people that would be their companions on their 44.2 mile/70 kilometer hike. As they disappeared up the hill and around the corner, we stood outside in our socks, on the sidewalk-less street, a little confused. Now what? We went back in and quickly decided there was absolutely no reason to be vertical, and back to bed we went. The church bells that wake Cusco each and every morning had already started ringing out around the town, so getting back to sleep wasn’t the easiest task, but Leeloo and I are champion sleepers, so we powered through and opened our eyes again closer to the more reasonable hour of 9am.

After a quick breakfast, we took off to explore Cusco, excited to have more time to inspect traditional textiles, peruse the hundreds of shops, find interesting places to eat, and check out the Choco Museo and its chocolate-making classes. I had found a bunch of places I wanted to visit on other travelers’ websites, so we used those as our loose guide and started off down Calle Resbalosa (literally Slippery Street), which is actually a steep set of uneven cobblestone stairs that wind their way down to the main square, Plaza de Armas. We supported each other as we stepped past a few laundry mats catering to the many backpackers in this town, several hostels and a Spanish tapas bar that looked like it might be a good place for dinner later. Down in the historic part of town where a large golden Inca emperor stands guard, we found Pedazo de Arte, a curious shop of curated Peruvian goods, where a delighted Leeloo honed in on a big woven hair bow (modeled in the pic above) that was inexpensive enough for her to buy with her own “soles”. Afterwards, we wondered in and out of inner courtyards, constructed by the Spanish conquistadors 500 years ago and now overrun by stalls and stores selling all manner of things made of alpaca and llama fur, Peruvian textiles and other objects inspired by the city’s pre-colonial past as the capital of the Incan world. 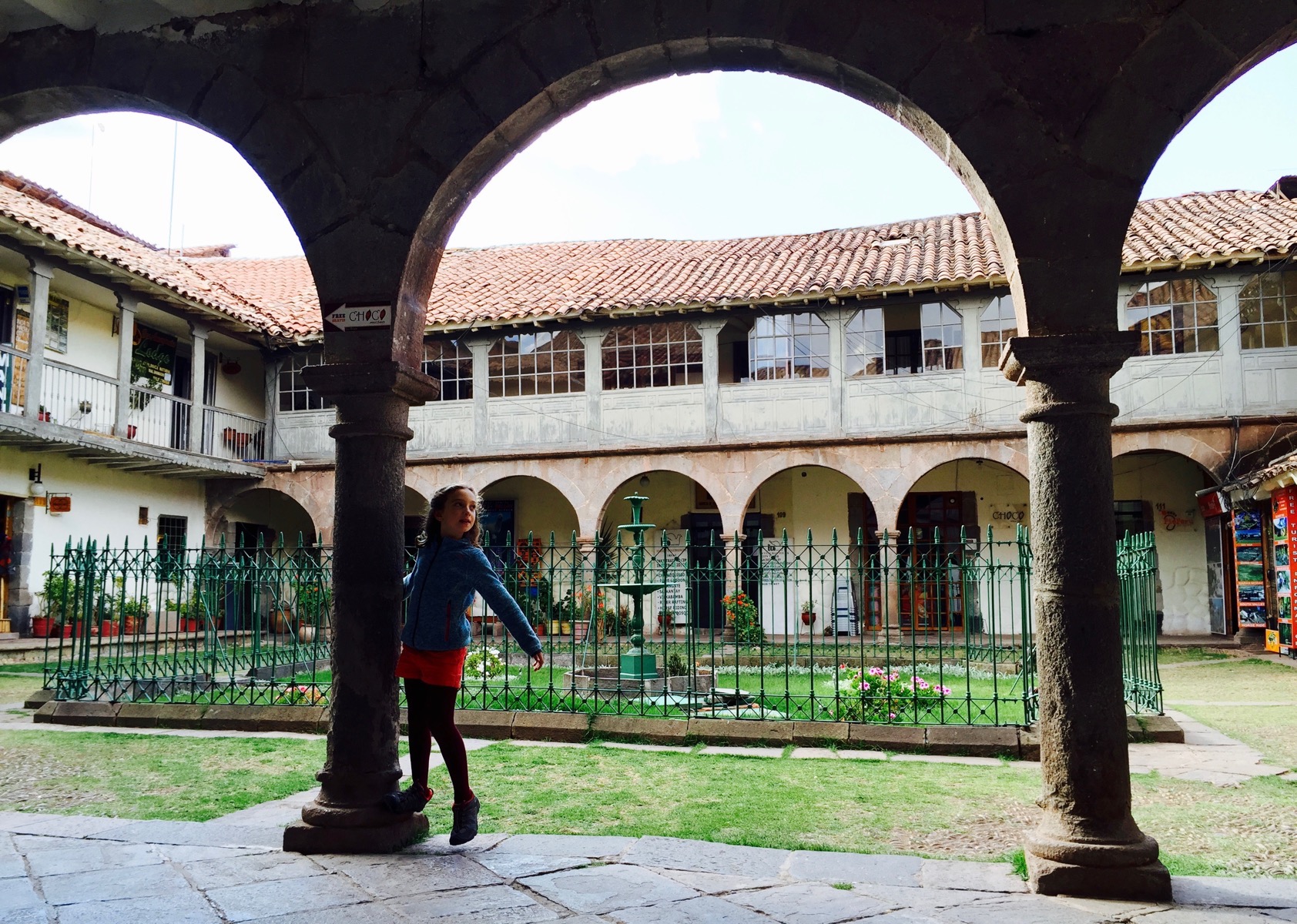 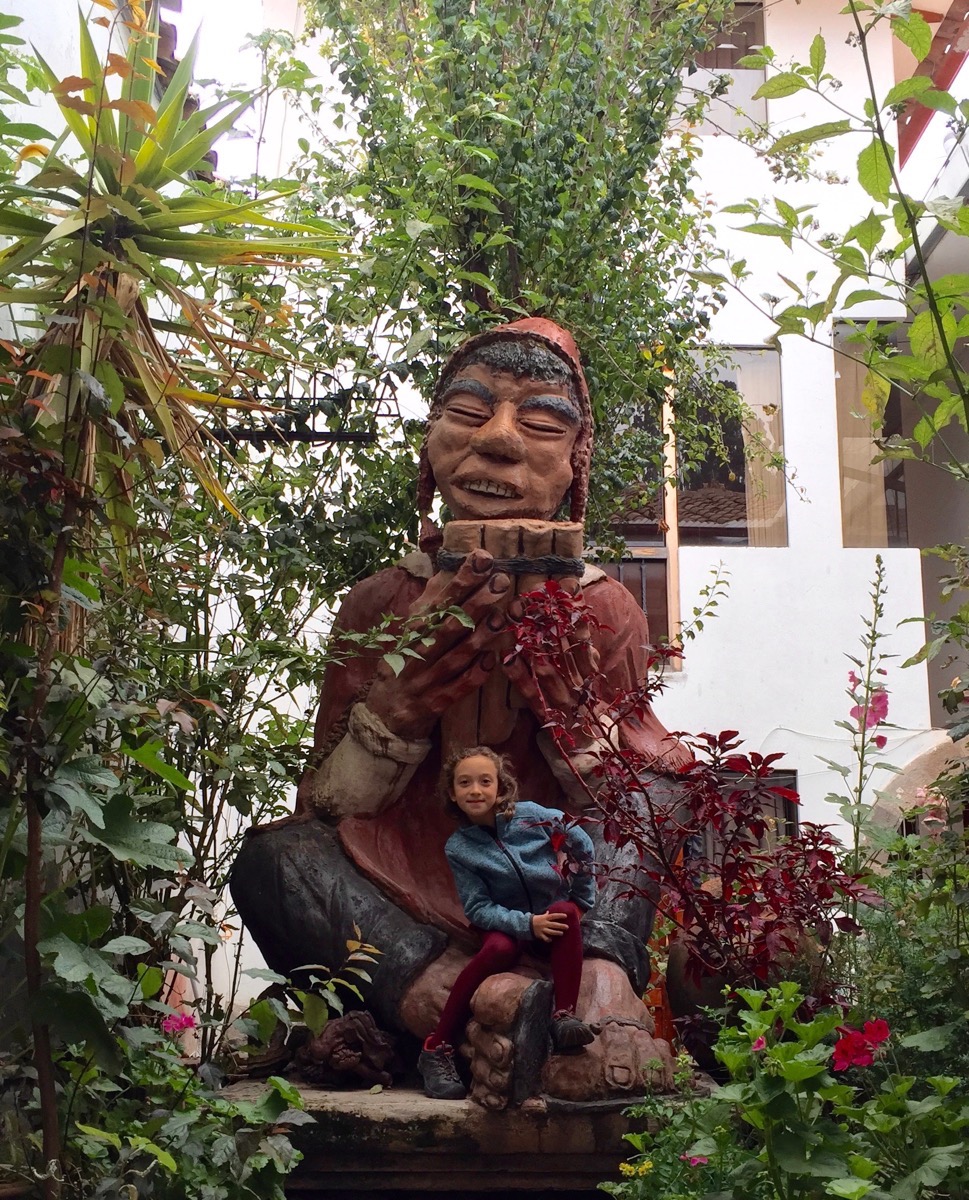 We ducked through one doorway and down a few steps into a hidden garden with bright purple flowers climbing the walls, and turned into a small shop full of jewelry and statuettes. A guy with a kind smile and pair of pliers in his hand looked up from his work and wished us “Buenos dias”. We had been looking for the perfect memento for our 3 trekkers, something that we could present them with at the end of their journey, something that might symbolize what they had endured and that they might keep on a shelf in their regular life as a reminder of this special thing they had done, together. The man with the pliers had just the thing. We purchased 3 after some negotiation and headed out the door towards the Choco Museo. There, we signed up for a 2-hour afternoon workshop and decided to head towards a Bohemian neighborhood called San Blas for lunch.

A day or two before, we had already had a lovely lunch in the small central plaza of San Blas with the boys at Pachapapa (a play on the Incan goddess’ name, Pachamama or Mother Earth). This time, though, Leeloo and I thought we’d take the opportunity to have some very American food at The Meeting Place, a small cafe set up by a British expat and his Peruvian wife. You see we’ve been experimenting with all kinds of exotic flavors for the last few months, so we were more than a little excited to get a taste of home. Here, far from the judgmental eyes of our gastronomy expert/uncle/brother-in-law and his equally particular brother, we freely ordered a big ol’ waffle, a BLT and a ridiculously large oreo milkshake, which overflowed onto its serving plate. By this point, Leeloo had officially declared it the best. day. ever. Hair accessories, a chocolate workshop, waffle, milkshake and her momma all to herself, the child was a glow with runaway joy. To cement the status of the day, we headed straight to an artisanal ice cream shop called Hada to indulge in a cone of flower petal-flavored helado. 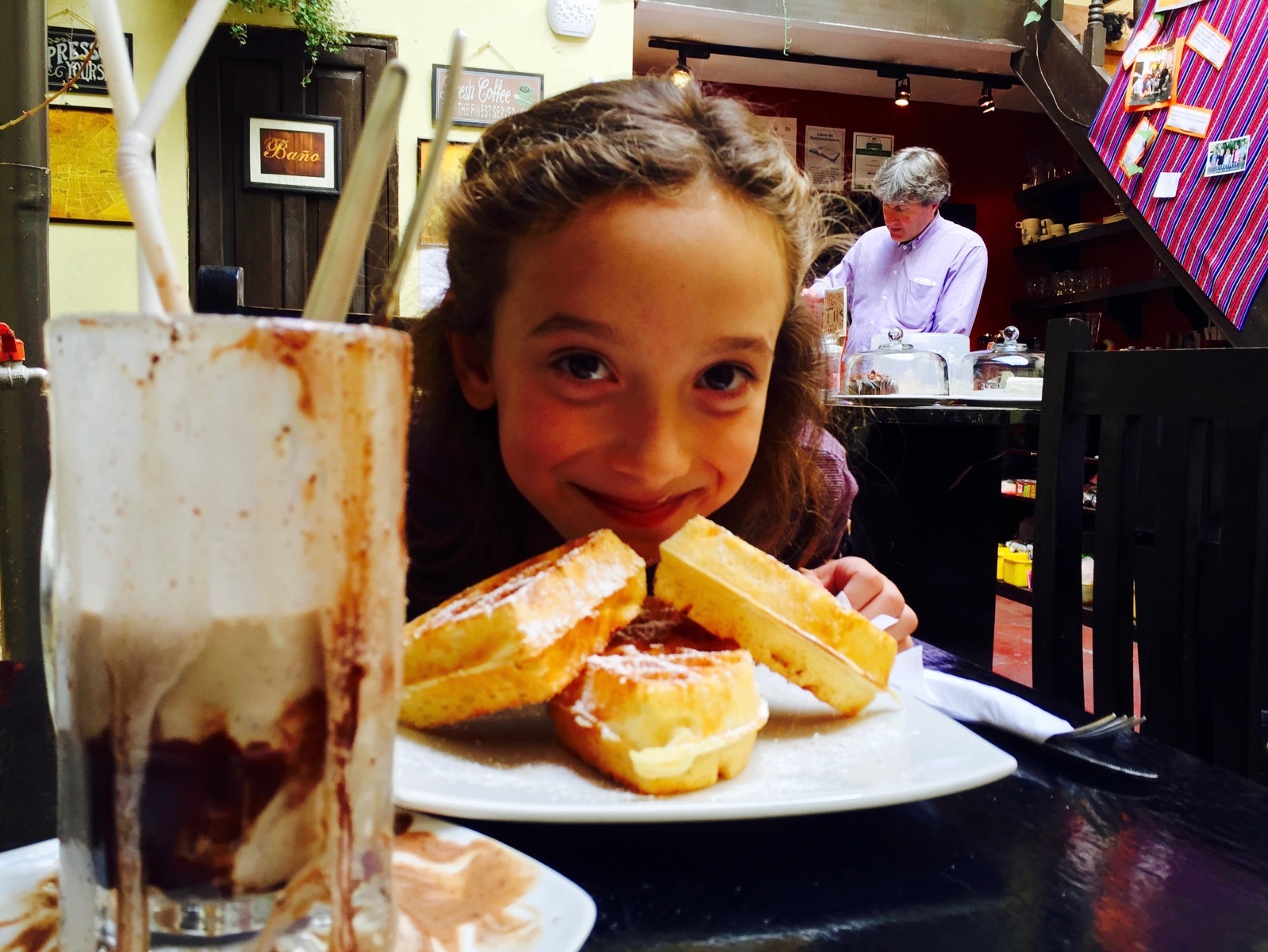 Chock full of sugar, we started our way down from the heights of San Blas back down to the city center just in time to make it to the chocolate museum by 4pm. By this time, we had been walking and exploring for about 5 or 6 hours, but it felt like we’d just gotten started, likely due to the crazy amounts of aforementioned sugar that we had ingested. A lesson in the cultivation of cacao beans in South America, started off our class. Leeloo was wide-eyed with curiosity and with anticipation for the cooking portion of the workshop. She loves to be in the kitchen, acting as the attentive sous chef in our household around 6pm most nights, and whenever possible shadowing her talented Ton Ton Seb and trying to learn all his culinary secrets. At several moments during the lesson, she stopped to give me squeeze or a kiss, just as she had done during the whole day, as if she couldn’t quite believe her good fortune, and making me very aware of the fact that we are very infrequently alone together. Big brother is usually around with his non-stop stories, constant questioning and historical pondering, and of course, Papa too. And the feeling was completely mutual – what a delight to have this bright pod of energy, fun and loving all to myself.

(Above, having been asked to entertain our fellow classmates with a song while stirring chocolate, Leeloo and I offered up a little Guantanamera!)

I won’t say too much more about the Choco Museo because Leeloo is very interested in writing an instructional guide to chocolate-making for you all, which hopefully will appear on the blog very soon. We wrapped up our 9 hours of exploration on another small plaza, sipping vegetable soups (to try to make up for the rest of the day’s menu!) and waiting for our chocolate to be ready for pick up. Once we had our bags of handmade goodies to share with the boys, a stash of cacao tea, and a few more chocolate bars from the museum store, we turned back towards home. In a flash, we were in the lit up Plaza de Armas, as always the ambiance was festive, travelers mixing with locals, music playing off in the distance. Leeloo and I crossed a soccer game in progress, dodging the ball and the group of little boys who were chasing it. We headed back up Slippery Street, taking it one steep step at a time, laughing at how slow we moved in comparison to the Cusqueños and absolutely gleeful to have spent the day among them, just the two of us. 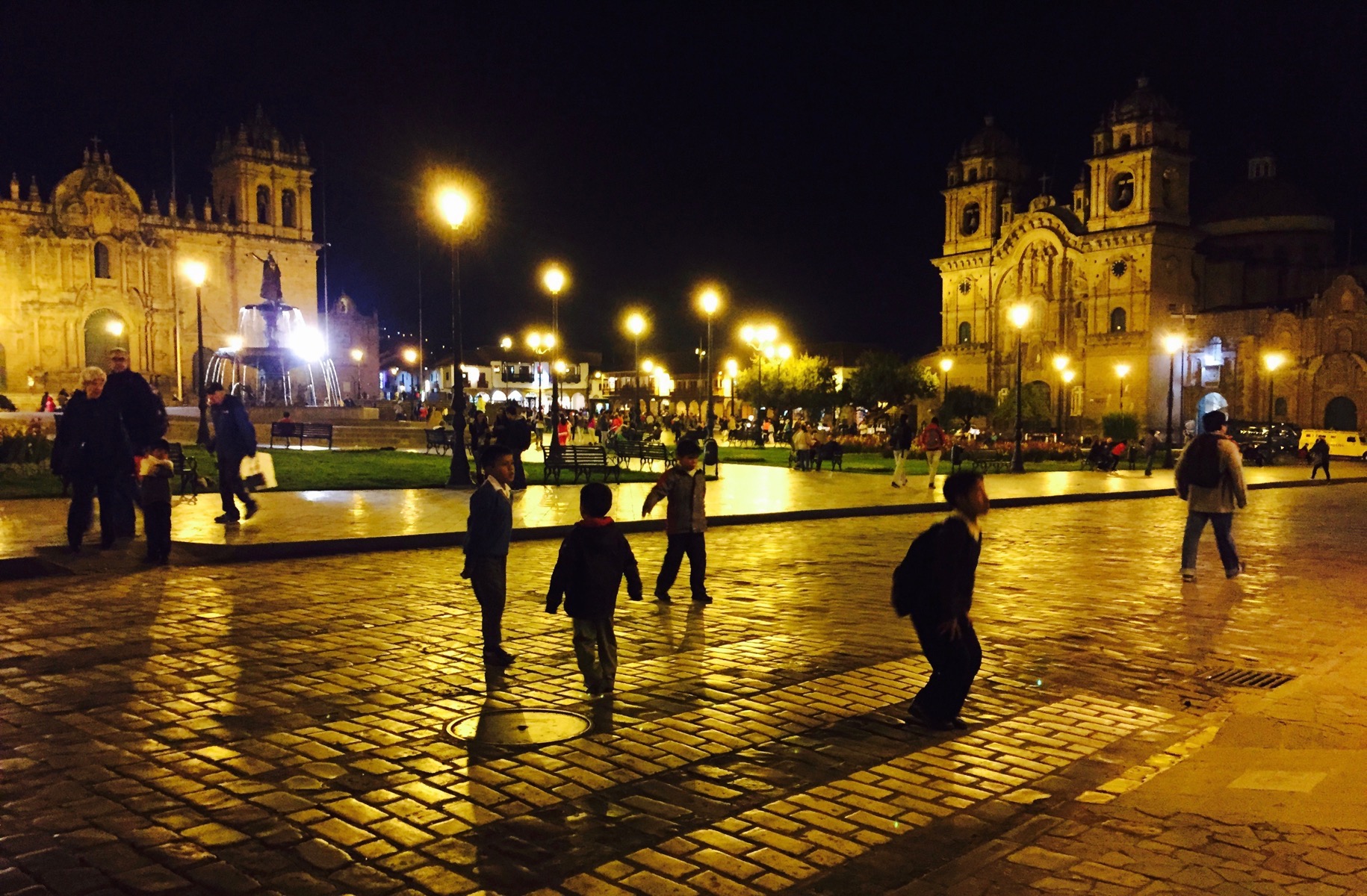